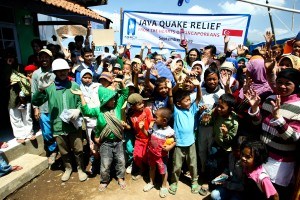 The deadly earthquake that struck off the coast of West Java on 2 September 2009 claimed the lives of at least 80 people and displaced more than 210,000 others. A total of 24,503 homes were destroyed, and communication networks were hampered during and in the immediate aftermath of the disaster. Tremors were felt in the capital, Jakarta, 200km to the north.