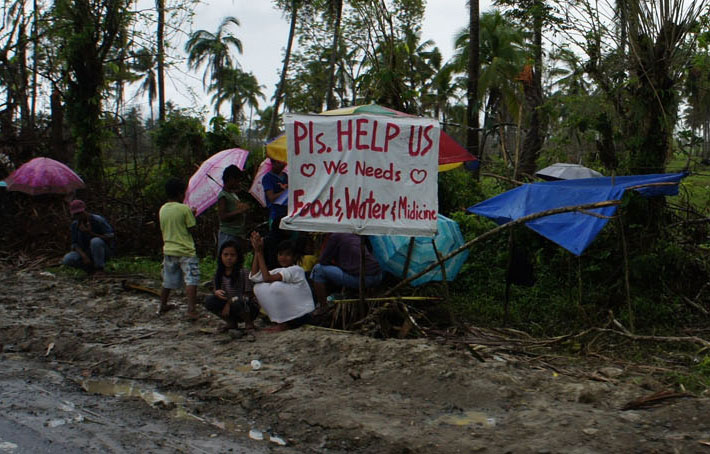 The third response team of Singapore’s regional humanitarian NGO Mercy Relief (MR)landed in Davao on Monday to personally expand its relief efforts in the worst-hit areas of Compostella Valley province in the Philippines, despite the challenging terrains to reach remote and affected villages.

In addition to continuing the first two teams’ efforts in addressing the survivors’ needs for food, water and temporary shelters through the provision of tarpaulins, MR’s third deployment introduced a Cash-For-Work (CFW) programme to help with the rebuilding of devastated homes and damaged ones such that families can return quickly to some form of normalcy of life.  Incidentally, the CFW programme not only provides financial boost in the form of temporary employment for those who have lost their jobs due to the Category 4 typhoon, but also the psychological boost to the community that they can start fending for themselves once again.

MR’s Senior Manager Masahiro Ishizeki, who was also in the earlier response team, said from the ground, “We have brought in more of our own manual-powered water filtration systems, PedalPure, to allow more communities to have better access to clean potable water and hygiene practices.  There is a real need to get the people back to their homes and start rebuilding their lives.  The CFW programme complements our earlier efforts in providing tarpaulins, building materials and tools to help the people realise their dreams of spending this Christmas in their own homes.”

Since 7 December, MR has personally delivered and distributed more than S$60,000 worth of aid to the Bopha survivors.

Fate Favours Faith –– In the midst of the mega mayhem, a statue of the Virgin Mary survives the brunt of Bopha unscathed.

Hands United – Local villagers helping to unload the PedalPure, bales of tarpaulin and jerry cans for deployment and distribution.

Cash-For-Work – –Communities benefiting from the CFW programme in the form of housing, wages and psychological boost.

Potable by Pedaling – –Training of Civil Defence officers on the mechanics and maintenance of MR’s own water system, PedalPure.

Smile of Relief –MR team distributing food parcels and jerry cans for storage of clean water from the PedalPure.

Line of Relief – –Local communities making their way back after collecting their relief supplies.

On 6th December, CDRC and the Philippines government made a direct and general appeal respectively, for international assistance after Typhoon Bopha struck the southern island of Mindanao, displacing nearly one millionpeople and claiming over 1000 lives. MR’s first team reached the devastated areas of Davao and Compostella early Friday morning, within 20 hours of the appeals.

A public fundraising has been launched from 7th Dec to 31st Dec 2012 to support MR“s aid efforts for the victims of Typhoon Bopha.