Teach the Man to Fish, then what?Reading Time: 3 min 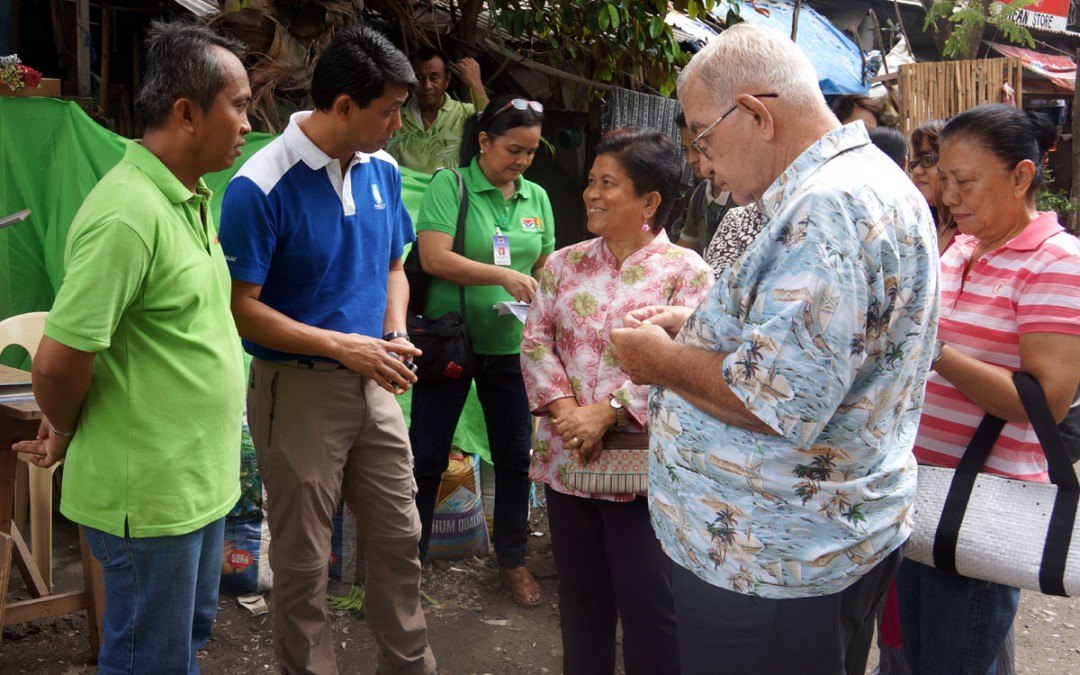 12,000 families living at the informal settlement (slum) of coastal Baseco on the fringe of Manila City are constantly hit by typhoons, tidal waves and extreme high tides.  Floods are persistent menace to the 52 hectare settlement, exacerbated by the tonnes of rubbish carried by the Pasig River which makes landfall at Baseco as it sits at the junction of the Pasig River and Manila Bay.

The average daily wage of a resident is 50 pesos (SGD 1.50).  The community’s main industry is garlic-peeling and handicrafts which includes weaving of bags from recycled tetra-packs and footwear from water-hyacinth.  Despite the natural and man-made threats, the community is highly determined to seek and embrace development.

On Thursday, the Philippines Secretary of State for the Department of Social Welfare and Development (DSWD), Corazon Dinky Soliman, Mercy Relief’s (MR) Chief Executive Hassan Ahmad, local NGO Urban Poor Associates’ (UPA) Executive Director Denis Murphy and local people’s organisation Kabalikat’s President Jeorgie Tenolete, graced the ground-breaking and blessing ceremony of the Community-Based Livelihood Centre (CBLC), which seeks to be the economic pivot of Baseco.  The 64 square-metre CBLC will house a handicraft storefront which showcases the handicrafts made by the community; a resource centre to provide the community with information and services on livelihoods and economic security, and a meeting hall for the Baseco Inter-Agency Network (BIAN) to discuss, strategise and decide on community development.

Addressing the attendees which included the local community and Humanitarian Affairs students from the Singapore Polytechnic (SP), Secretary Dinky Soliman commented, “This project is groundbreaking because for a community such as Baseco, it is breaking grounds not just for this building but also for bringing up the economic level of this community into the mainstream, by having products that will support them as well as provide some surplus income such that they can have a better life.”

The CBLC, scheduled to be completed in 3 months, is a joint project of MR, the UPA and the local people’s organisation Kabalikat.  Secretary Soliman went on to quote the Philippines President that, “Freedom of rights is very important, and the first thing that all of us should work for is the freedom from hunger.”

In addition, the 3 partners are taking on the challenging task of protecting the coastal community’s habitat from the high waves, as part of a disaster risk reduction (DRR) initiative. Volunteers from the 3 organisations have started clearing the coast and planting mangroves to act as a natural wall against the waves and the incursion of rubbish, and in tandem, rehabilitate the coast.

As part of the community’s holistic development, DRR and resilience, urban vegetable gardening was introduced for food sustainability at household levels and for more nutritious and balanced diet.

(right) The handicrafts by the community include bags made of recycled tetra-packs and footwear made of dried water hyacinth.

The Blessing Ceremony for the CBLC, which was conducted by a pastor and an imam, was attended by the Baseco community,staff from the partner organisations, local government officials and the Humanitarian Affairs students from SP.

MR MOVE volunteers from the ITE West’s CD Lionhearter Club clearing the heaps of rubbish and wastes at the  coastal area.

Young mangroves from the new nursery at Baseco were used to plant at the coastal area as part of disaster risk reduction.

The new and green urban vegetable garden (left and centre) has been adopted and implemented by individual households of the  Baseco community as part of the food sustainability and balanced diet and nutrition programme.