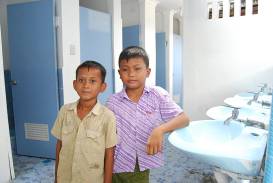 Mercy Relief (MR) unveiled three completed rural development projects at three different locations in Paang and Medan from 12-14 July to address the issues of water and sanitation, healthcare, education and livelihood faced by the communities afflicted by poverty.

The projects include inter alia the provision of water for consumption and livelihood (agricultural and livestock farming) at Pesisir Selatan District in West Sumatra, the eradication of open-defecation and waste management through the construction of communal sanitation facilities for slum community in Medan Belawan Sub-district and construction of irrigation systems; river repair to restore fishermen’s livelihood at Hamparan Perak Sub-district in North Sumatra.

An improved sanitation environment has been made available for the villagers under the purview of MR’s development project at Belawan.

The projects feature a common trait of community empowerment – that the communities themselves were actively involved in the execution and management of the various schemes that complemented the projects, and that women augmented their traditional housewife roles to assist too, as a significant tenet as well as benefit.

MR’s Chief Executive Mr Hassan Ahmad remarked that community involvement is a priority in our development projects, saying that “in doing so, the people take up ownership of the programmes, and are directly involved in the improvement process of their environment and self-enrichment. This is important, including the immersion of the women in decision-making and execution of the community initiatives.”

With the support and partnership of local Non-governmental Organisations (NGOs), MR has been able to develop initiatives to kickstart the community’s development. It is imperative that the communities sustain the progression independently by taking ownership of the programmes and playing active roles in the improvement process.

One of the projects aimed to provide water for consumption and livelihood (agricultural and livestock farming) at Pesisir Selatan District in West Sumatra.

Together with Indonesian partners Lembaga Pengkajian dan Pemberdayaan Masyarakat (LP2M), an NGO focused on development and enhancement of community organizations, MR strives to encourage community empowerment among the villagers. Village committees were set up as one of the methods to implement this sense of ownership. These village committees were established to maintain and manage important development project, like the water supply system, by collecting a nominal fee from each family.

A centralised co-operative to set up micro-enterprises, like chicken and duck-rearing initiatives for the villagers, was another method used to help the villagers sustain the development efforts through their own progression.

Families are given about 45 chickens and ducks to rear eggs for sale in the micro-finance enterprises managed by women.

Another project was the eradication of open-defecation and waste management through the construction of communal sanitation facilities for slum community in Medan Belawan Sub-district.

Applying its capacity and experience in engineering and construction, and in tandem with the support of Indonesian project partners Sources of Indonesia, an NGO with a focus on the improvement of social welfare, MR built a communal sanitation facility including 14 toilets, six showers and washing amenities.

More women are in the committees managing the dam, water points and mangrove nurseries, signifying the involvement of women in the community initiatives.

Five workshops were held in March to educate the villagers on the concept of recycling garbage as fertiliser or marketable products. This would empower the villagers to generate more income and sustain its community’s developments.

MR’s Chief Executive Hassan Ahmad remarked that “village communities are often brewing with ideas on development. It is through initiatives like this that we are confident we have started something for them to build on.”

Villagers having a committee meeting to discuss their community’s sustainable development efforts.

SCDF volunteers training the villagers on fire evacuation drills and how to use fire extinguishers.

In the Hamparan Perak Sub-district, the villagers’ main source of income is from paddy fields which are affected by improper irrigation and flooding from seawater inflow from the nearby coast (especially during rainy seasons), leading to crop destruction and an average annual yield of one harvest. The fishing industry (the secondary source of income for the villagers) is also in a slump due to coastal destruction and mangrove deforestation (due to villagers clearing land for paddy cultivation).

MR applied its technical knowledge skills and community development methodologies in tandem with Indonesian project partners Yayasan Pusakan Indonesia (an NGO with a focus on children and women protection issues) to implement water provision projects. The projects include the construction of water dams, provision of water points and cultivation of mangrove nurseries.

64 women are in the committees managing the dam, water points and mangrove nurseries, signifying the involvement of women in the community initiatives.

The successful implementation of MR’s development project has addressed the issues of water and sanitation, healthcare and livelihood and significantly strengthened the community’s belief of their integral role in improving their lives.

The successful implementation of MR’s development projects strengthened the community’s belief of their integral role in improving their own lives.

MR’s Chairman Mr T K Udairam championed the spirit of the communities saying that “the project implementers are just the facilitators of what a community is capable of on their own; just look at the schemes they’ve come up with over the past few months.” MR’s Chief Executive Mr Hassan Ahmad supported this statement by emphasizing that “what is more important now is that they continue the momentum of their own progression, such that the development is self-sustained.”