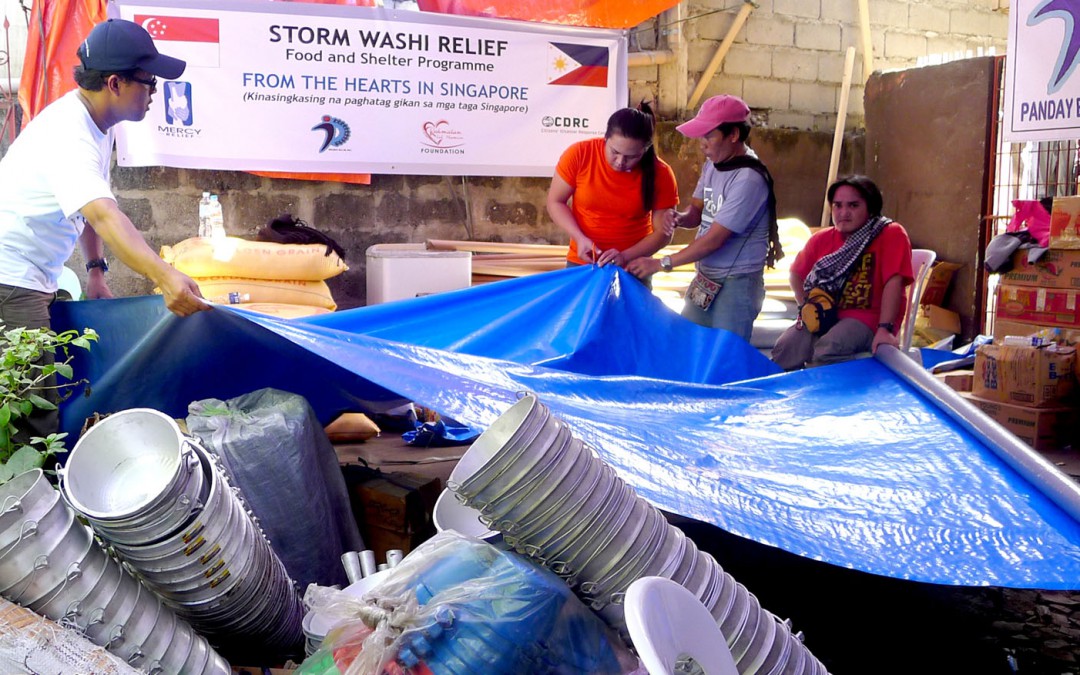 A total of SGD63,000 has been expended by Mercy Relief (MR) since the second day of the international appeal made by the Philippines government, to address the critical and essential needs of the communities in Cagayan de Oro (CDO) and Iligan municipalities affected by storm Washi.  The Singapore-born humanitarian organisation’s five-week relief engagement included a fresh food programme, provision of clean drinking water and tarpaulin sets to help displaced families overcome the overcrowding issues at evacuation centres and simultaneously avoid the risk of an outbreak of diseases.

Seizing on the new school term which commences next week, a psychosocial programme is currently being prepared to serve 500 affected children with educational materials such as school books and bags, as well as recreational items to allow them to learn and play, in the efforts to bring their lives back to normalcy and simultaneously divert their minds away from their traumas.

Over at Gingoog municipality, 65 kilometres northeast of CDO, the communities of Agay-ayan barangay were spared from the extensive impact of the feisty storm and experienced only minimal damage due to their preparedness – an early warning system and structural defence.   The local Disaster Preparedness Committee (DPC) members continuously monitored the increasing intensity of Washi and alerted villagers ahead of time through the ringing of churches’ bells for them to evacuate to higher grounds as Washi approached, hence avoiding any casualties.

A two-metre high breakwater which had been built earlier around the villages had prevented river waters from overflowing into them despite three days of continuous rains and increased water levels, resulting in only 100 out of the 600 households experiencing half a metre of flash flooding.

These preventive measures were part of a SGD150,000 Disaster Preparedness and Risk Reduction (DPRR) programme implemented by MR shortly after typhoons Ketsana and Parma inundated both urban and rural areas in the Philippines in late 2009 which triggered the country’s worst flooding in 40 years.  Partnering with local NGO Citizens’ Disaster Response Centre (CDRC) which manages regional monitoring centres (RMCs), the programme helped reduce the risks and mitigate the impacts of disasters faced by these vulnerable communities.  The RMCs were equipped with relevant communication devices including laptops, internet-capable mobile phones and digital cameras to access, document and circulate critical information to the participating communities before and during crises.

The DPRR programme which consisted of three components –Community-based risk management, Community-based natural resource management and food security and, Promotion and advocacy –was aimed to increase the capability of communities in floods and landslides-prone areas in the country, thereby reducing their vulnerabilities to such hazards.  An awareness seminar, trainings and community drills were implemented to collectively develop the communities’ capacity in dealing with natural disasters within their respective landscapes.

The nine-month programme had benefited 24 communities from five provinces over the Visayas and Mindanao islands which were severely affected by the 2009 typhoons.

MR Chief Executive Hassan Ahmad said, “The lack of knowledge and resources had earlier hindered their ability to put in place disaster risk reduction mechanisms, both in terms of systems and structure.  The programme has to be adapted for the various communities which hold their distinctive terrains and challenges.  The Philippines experiences an average of 20 typhoons yearly which means it is crucial that communities are properly equipped to handle and overcome the risks brought about by natural disasters.  Failing which, the probable consequence is deaths, distraught, destruction and high costs of remedy in terms of relief and reconstruction.”

A 2-metre high breakwater which was earlier built around the villages of Agay-ayan barangay, Gingoog municipality, protected them from burgeoning rivers, restricting the extent of flooding to only half a metre high. Only 100 out of 600 households were affected with minimal damage.

The programme involved participants across all segments of the communities.