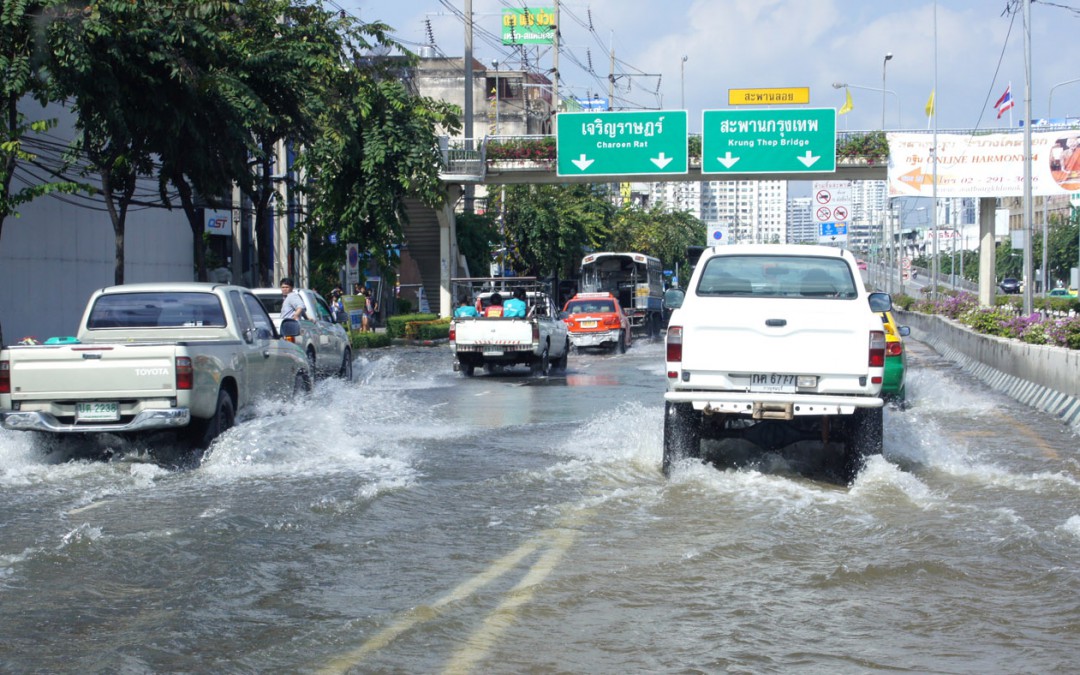 Last weekend’s high tide caused the Chao Phraya to overflow with waters seeping into Bangkok, inundating several parts of the Thai Capital.  Vehicle owners evacuated and parked their automobiles on bridges and flyovers to avoid the creeping flood waters.  Many homes are still submerged with water levels rising to more than 2 metres in districts such as Don Muang, Bang Khen and Lak Si.  Despite their anxieties and confusion, many Bangkok residents have thronged forward to help out their neighbours in the worst-affected northern provinces such as Ayutthaya, Nonthaburi and Pathum Thani.  Amongst these Samaritans were more than 500 members of the Soka Gakkai Thailand who volunteered for Mercy Relief (MR) to sort and re-pack aid supplies such that the Singaporean humanitarian NGO could deliver and distribute them quickly at the affected areas.

Left : Roads along Rama III in Bangkok city experienced the overflow of the Chao Phraya last weekend, causing a slowdown to traffic.

Right : More than 400 volunteers from the Soka Gakkai Thailand (SGT) sorted and re-pack relief supplies for Mercy Relief’s distribution in the affected northern Thai provinces. Staff of Singapore corporate groups including KPMG (far right) and The Ascott (in white, 4th from right) loading the relief supplies for Mercy Relief’s distribution at SGT Centre.

Over on Sunday and Monday, MR’s 2nd deployment of eight personnel were in Nonthaburi and Pathum Thani where most of the houses have been inundated by the flood waters and the communities had to resort to living in overcrowded evacuation centres such as temples which are located on higher grounds.  While the second batch of meals-ready-to-eat (MREs) arrived into Bangkok last Wednesday, more relief essentials ranging from instant meals, canned food, milk powder and drinking water to baby diapers and sanitary napkins, amounting to USD20,000, were procured locally from the unaffected neighbouring provinces of Nong Khai, Chonburi and Samuprakarn.   To date, MR has committed and personally delivered 70,000 packs of MREs, 20 inflatable and motorised rescue boats and other survival and hygiene essentials worth S$268,000 to support the floods relief efforts in Thailand.

MR Chief Executive Hassan Ahmad said, “The objectives of MR’s 2nd deployment in Thailand is to continue and expand on our earlier relief  efforts at the worst-hit areas, to include  Nonthaburi and Pathum Thani provinces; and to stand-by for the possible flooding of Bangkok.  Relief authorities seem a little jaded and tired, most likely due to the crisis being long-drawn and  widespread.  Apart from physical exhaustion, many of these relief officials’ are working in anxiety as their own homes and families are also affected or at risk, by the floods.  Boats are still very critical in establishing the supply network to the affected communities, especially those stranded at isolated areas.  It’s one thing to have relief supplies, but it’s also very important that these supplies are able to reach the intended beneficiaries.”

Left : Houses in Lak Si district, 20 minutes away from Bangkok city were half-submerged by the overflow of the Chao Phraya last weekend.

Left : Locals in Pathum Thani joined in the unloading of the relief supplies.

Right : MR’s response team moved around in rescue boats stacked with relief supplies, reaching out to stranded communities housed at evacuation centres such as temples in Pathum Thani.

Meanwhile, support from partners such as KPMG (Singapore), The Ascott (Thailand), Soka Gakkai Thailand and Thai transport companies including United Motors and Borneo Technical Limited, has helped the Singapore-born humanitarian outfit to carry out its relief efforts more swiftly at the affected locations. (Refer to additional notes)

Right : Assistant Director Francis Lee handing out adult diapers, water and food to a flood victim, who had lost his lower limbs earlier, at an evacuation centre in Pathum Thani.

KPMG (Singapore) has once again stepped forward to raise funds in support of Mercy Relief’s regional aid efforts. Last Friday, the firm centered its efforts around the Central Business District (CBD) area where more than 100 of its staff plied the streets with donation cans, over three lunch-hours, and raised more than SGD20,000 from the CBD community.  In addition, it secured the support from its network of partners in Thailand for the relief team’s ground logistics and accommodation.

Soka Gakkai Thailand helped with the local procurement of relief supplies, providing storage space and volunteers for the repacking of the relief supplies for distribution.

United Motors and Borneo Technical Limited provided complimentary transportation (trucks and pick-ups) to facilitate the delivery and distribution of supplies to the affected locations.

Local philanthropic organisation, Chen Su Lan Trust, provided its strong and continued backing with a SGD100,000 donation.  It previously donated SGD183,000 to MR in support of other major relief efforts.