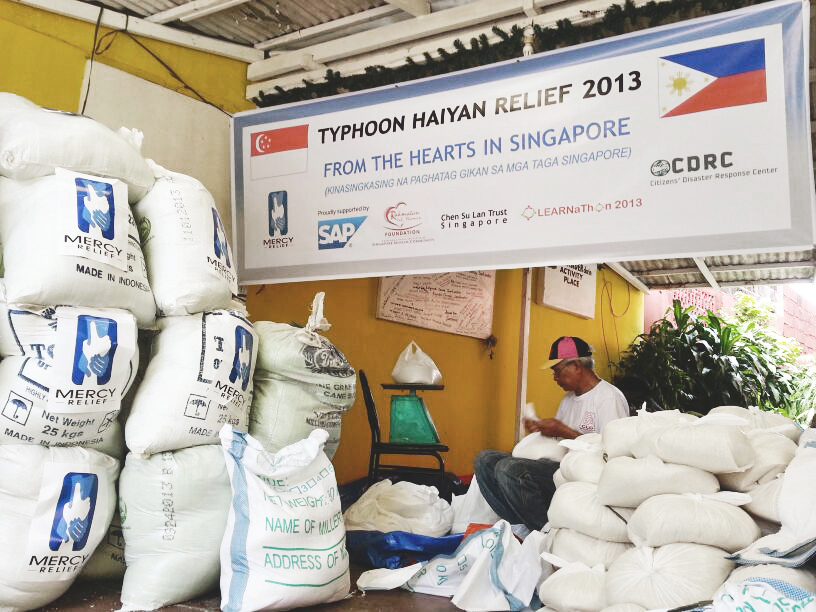 One month has passed since super Typhoon Haiyan struck the Philippines, and millions of people, particularly those living in rural and isolated areas, are recovering slowly. Having successfully procured and distributed basic survival essentials including water, food and hygiene kits for the past weeks, Singaporean humanitarian organisation Mercy Relief (MR) is now also addressing the early recovery and rehabilitation of the affected communities across the typhoon-stricken islands.

MR’s 5th response team arrived in Negros Occidental last Wednesday, two days after the return of the previous team, to continue the chain of aid delivery, including the deployment of Pedalpure system, across the affected locations. The team distributed food relief packs consisting of rice, cooking oil, canned sardines and dried fish to 4,000 families who are still living in overcrowded evacuation centres from the barangays of Cadiz Viejo and Caduhaan last week. The food relief packs would help to inject nutrition and sustain normalcy into the diets and lives of the communities. 290 stranded families in Sitio Lakawon, an island only accessible by boat, also received the food aid which was personally distributed by the 3-man team.

After further rounds of needs assessment and working closely with local partner, Panay Center for Disaster Response, the team headed to Capiz province to procure construction materials including nails, steel wires, zinc sheets, chain saw and hammer to allow the survivors to embark on the process of rebuilding their lives and homes. Cash crops such as peanut and mung bean seeds were additionally procured to help provide a source of income and restore their livelihood opportunities. These items were personally distributed on Monday to 300 families in Cuartero municipality where more than thousands of homes have been left fully or partially damaged by the category 5 typhoon last month.

The total amount of aid for the current tranche is worth SGD100,000.  To date, MR has personally delivered and distributed five units of Pedalpure, more than 11,000 food relief packs and hygiene essentials, construction materials and cash crops worth almost S$210,000 to support the typhoon relief effort in the affected provinces of Bohol, Leyte, Aklan, Palawan, Negros Occidental and Capiz in the Philippines.

MR Chief Executive Goh Chin Siang shared, “The continual chain of aid delivery allows MR to be privy to the ever-changing needs on the ground, hence the ability to better assist and accompany the victims’ recovery –particularly the rebuilding of homes and providing livelihood opportunities. In addition, healthcare for the affected communities in remote areas warrants attention.”

MR’s next aid deployment, comprising a medical team, left this morning to support the healthcare needs of the survivors, focusing on those in the rural and affected municipalities of Estancia, Concepcion, Batad and Carles in Iloilo.

(left) Local volunteers and partners worked alongside the MR team to sort and repack relief supplies for distribution. (right) Around 4,000 families benefited from MR’s relief distributions in the barangays in Negros Occidental.

MR team personally distributed the relief supplies to the affected communities in Barangay Caduhaan, Cadiz Viejo and the island of Sitio Lakawon.

Affected communities are in dire need of critical supplies to rebuild their damaged homes and restore their livelihoods.

Relief supplies including construction materials and cash crops were distributed to 300 families in Barangay San Antonio, Cartero to allow rebuilding of lives and homes of the affected communities.

(left) The house of Madam Marilou Arlao damaged by the typhoon. (right) The house being rebuilt with the construction materials distributed by the MR team.

* MR has been implementing relief and development projects in five areas across the Philippines – Bicol Region, Metro Manila, Mindanao, Zambales and Visayas – continuously since 2006 as part of its disaster risk reduction efforts in line with the Hyogo Framework and AADMER. Click here to read more on “MR in the Philippines”.