Ops THR Update #03 – Spirit of camaraderie in times of crisis 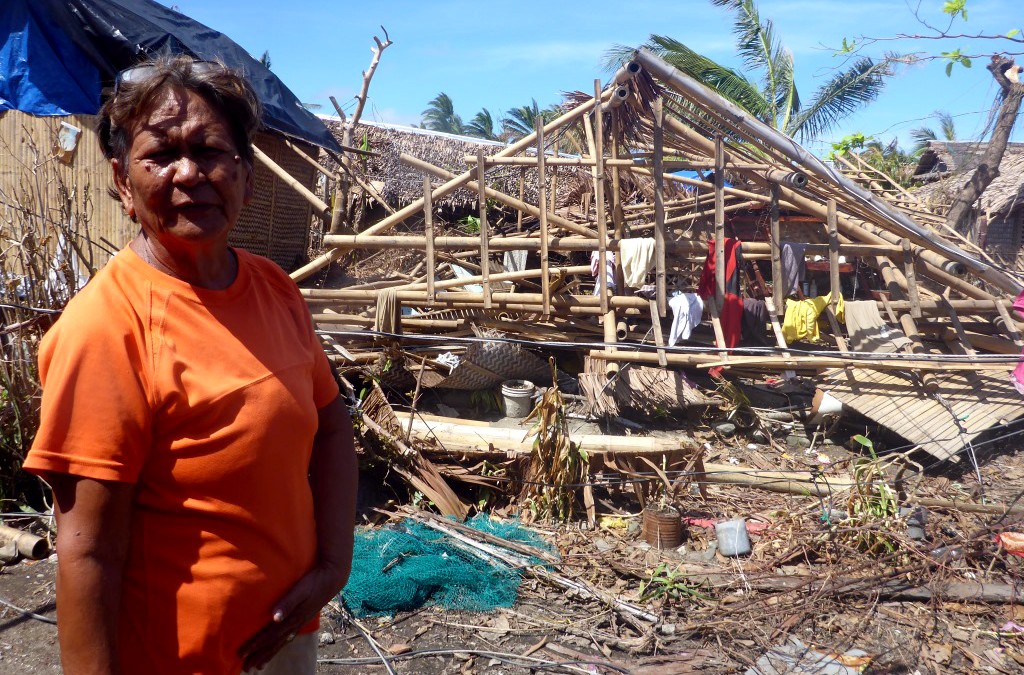 65 year old Madam Juliana Ozamis and her son rushed to safety when super Typhoon Haiyan struck her village of Tambak in the municipality of New Washington, Aklan province.  The lashing winds destroyed her house leaving her without any form of basic survival items needed to sustain her family in the aftermath of the crisis.  Three weeks have passed, and Madam Julian remains one of the 410,000 displaced communities in the province who are still struggling to stabilise their lives.

“My neighbourhood has not received any aid from the authorities or any aid agencies since the disaster happened.  We only make do with what we have left and share amongst our neighbours who are less fortunate.  We are just thankful that we are alive,” shared Madam Juliana.  New Washington municipality is one of the hardest hit coastal areas, apart from Numancia and Batan where tens of thousands homes, mostly made up of bamboo and anahaw leaves, have been damaged.  Power lines are estimated to only be restored in four months time.  In the meanwhile, the villagers’ sources of livelihood such as fishing and cash crops for plantations have all but been decimated.

Two days before the typhoon struck, 51 year old community leader, Nenita Feliciano Tugna was busy evacuating the villagers of Barangay C. Laserna to Aklan’s evacuation centre for the vulnerable groups of people such as the elderly, sick, pregnant women and children.  Nenita, who was also in-charge of managing 150 volunteers to assist with the separation and repacking of Mercy Relief’s (MR) fourth tranche of relief items shared that Typhoon Haiyan has thrown up a lot of heroes and survivors who came forward to help those who are worst affected.  She added, “The camaraderie and the spirit of sharing keeps everyone going despite the difficulties we are facing. This helps to lift the morale of these survivors and give them a sense of worth and meaning.”

MR’s 4th response team was deployed on Tuesday to continue its aid delivery across several barangays in themunicipalities of Kalibo, New Washington and Numancia, in typhoon-hit Aklan.  Working closely with Philippine’s Panay Center for Disaster Response, each relief food pack is composed of 5kg of rice, canned sardines, dried fish, noodles and cooking oil, which were personally distributed to over 4,000 affected families.  MR’s water filtrations system, PedalPure was also deployed to help address the locals’ critical need of clean and potable water.  The 4-man team would head to Palawan province this weekend to continue serving the less served affected communities.

MR’s Chief Executive, Goh Chin Siang commented from Aklan, “The magnitude of devastation caused by Typhoon Haiyan is extensive.  MR will continue to assess the affected ground and attend to those isolated communities who have not received aid.  Whilst some areas have started with rehabilitation efforts, there are still a lot more survivors whose basic survival needs are not being met.”

This latest tranche of aid is contributed by leading global business software solutions company, SAP Asia who came in to provide a strong backing with SGD100,000 donation to support Mercy Relief’s operations in the Philippines.

(left) Madam Juliana Ozamis standing in front of a pile of debris which once stood her home. (right) Community leader Nenita Feliciano Tugna leading the pool of volunteers through the packing of relief supplies.

Volunteers comprising locals and survivors of Typhoon Haiyan came forward to work alongside the MR team to sort and repack relief supplies for 4,000 families in Aklan province.

MR personnel and local volunteers working through the hours to distribute aid to the local community.