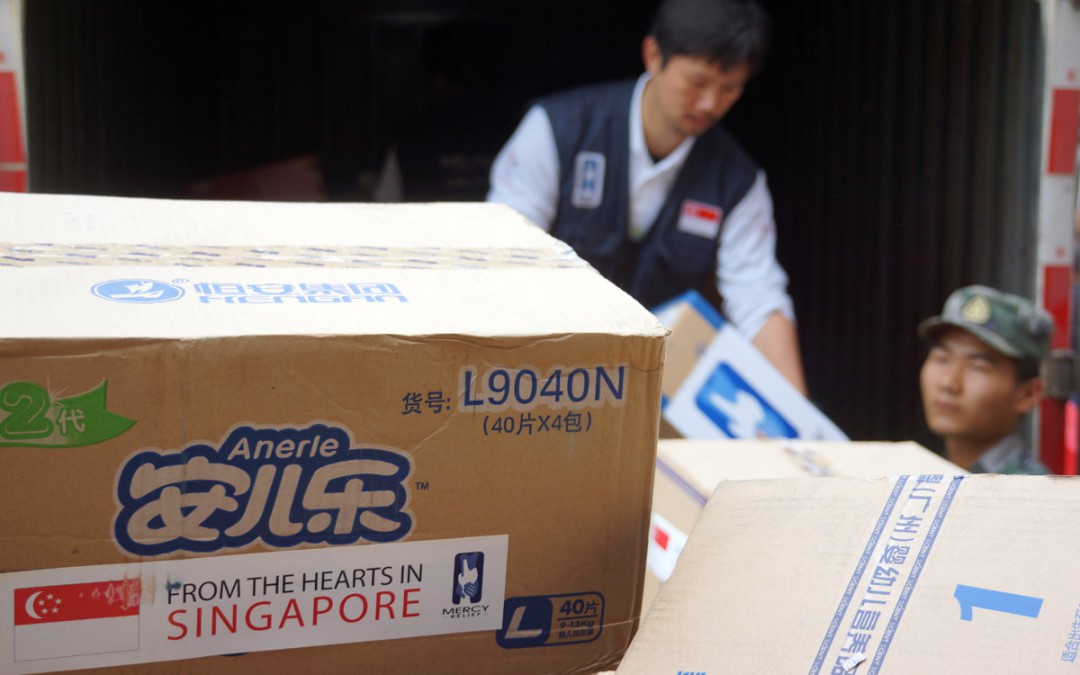 The third tranche of assistance, centering on children’s needs, included paediatric medicines, diapers, milk formula, sanitisers and Play Packs, arrived today at Shuang Shi Township distribution centre and the Lushan County People’s Hospital in the Lushan County, which was the epicenter of the quake.  The Play Packs comprised recreational and stationery items to help fill the children’s  time and minds, which seek to stimulate the children psychologically and subtly scraping the trauma off them.  More than 1,000 affected children benefitted from the latest batch of aid.  To date, MR has provided SGD65,000 worth of relief items, since arriving Sichuan within 48 hours of the disaster, partnering the Sichuan Foundation for Poverty Alleviation (SFPA).

The MR teams met with the Sichuan Provincial People’s Government’s vice-secretary general Zhao Xue Qian, who extended his gratitude to the Singapore NGO and Singaporean donors for their support towards the Lushan quake victims and the NGO’s past and ongoing relief and development efforts in Sichuan since 2008.  Vice-secretary general Zhao, who oversees the coordination of relief operations, gave a comprehensive overview of the situation and the government’s plans for recovery.  He also welcomed MR’s continued engagement for the recovery phase.

MR’s Chief Executive Hassan Ahmad commented, “The situation in quake-hit Sichuan has somewhat stabilised. The Chinese government’s efforts were commendable throughout this emergency phase and is quite in control of the crisis.  While the government is focusing on rebuilding infrastructures including roads, electricity, water and gas, there are other areas such as healthcare and the needs of vulnerable groups like children, women and the elderly which require immediate and equal attention.  These are the possible areas where MR could help support in filling the gaps.”

MR will be conducting an island-wide street collection on 26th May and welcomes volunteers to participate in this fundraising initiative.

The 3rd batch of aid supplies arrived at the Shuang Shi Township distribution centre in Lushan County, the epicenter of the quake.

Play Packs (left) and diapers (right) were included in the children-centered 3rd batch.

Pediatric medicines, diapers, formula milk and Play Packs arrived at the Lushan People’s Hospital, located just a few kilometers from the quake’s epicenter, to address the needs of the child patients, received by the hospital’s Director Chen.

The two blocks at the Lushan People’s Hospital which housed the Emergency unit  (left) and the wards (right) were severely damaged.

(centre & right) Injured and sick children being treated in the open within the hospital compound.

(left) Vice-Secretary General Zhao ( 2nd from left) accompanied by SFPA’s Executive Chairman Weng (in jacket), sharing with the MR team on the overall situation and the government’s plans moving forward.