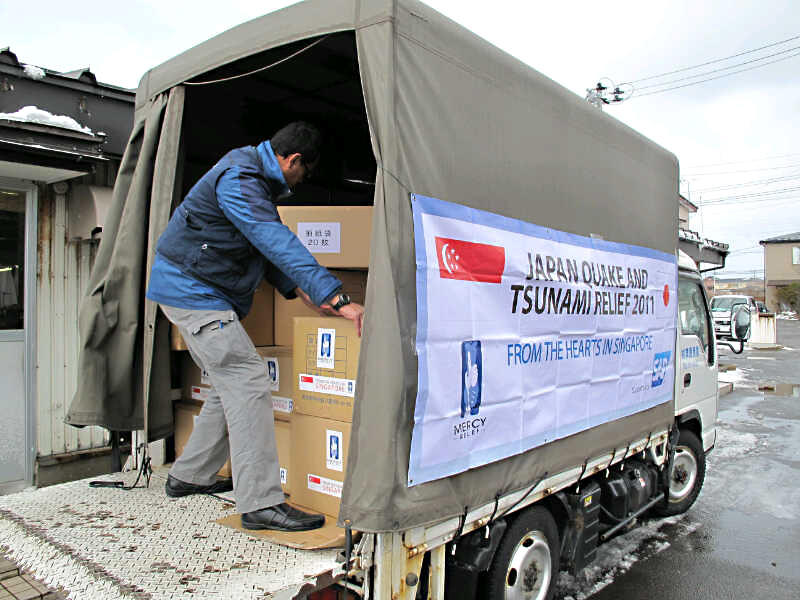 Mercy Relief’s (MR) preliminary 2-man team to Japan has established the logistics supply network in the northern part of quake and tsunami-affected areas near Iwate.  Operating amidst sub-zero temperatures, the team is now able to procure much-needed relief supplies from several unaffected neighbouring prefectures and transporting them to the various shelter centres holding the survivors who have been evacuated from the disaster affected areas.

MR’s initial tranche of relief supplies comprising blankets, water and food, amounts to USD50,000.  A second relief team has been deployed today to bolster its aid efforts there.

Working with the local governmental and non-governmental agencies and the business community there, MR’s operational objective remains focused towards supporting the stabilization of the ongoing crisis i.e. addressing the essential needs of the affected communities and reducing the risk of exposure to natural elements such as the falling snow and dipping temperatures.

MR is currently serving the affected areas which are a safe distance outside the radiation-hazard zone (officially 30km radius of the nuclear reactors’ location).  In order to facilitate and ensure the team’s safety and quick evacuation, if necessary, a dedicated unit at the MR Headquarters in Singapore is monitoring the radiation alerts and advice from the Japanese Government and the International Atomic Energy Agency (IAEA).

MR has received its largest donation of SGD 200,000 from a group of 4 Chinese donors, bringing its total amount raised to SGD 394,219. Whilst donation has mostly come from private individual donors, outpours from its first fundraising event, Gambatte Japan!, held last night at the Blujaz Cafe (organized by the Wakyo Association, Aya School and Vivid Creations) brought in SGD 76,013.  Commenting on the encouraging support that Mercy Relief has received from the public, institutions, corporate and the Japanese expatriate community to help with its fundraising efforts, its Chief Executive, Mr Hassan Ahmad said that, “while MR does not have a fundraising target, we will do as much as the financial resource that we have. It is also important to note that it is not merely about the amount of money that MR is raising, but about people coming onboard the humanitarian platform and having compassion for others who are in distress.”

Some of MR’s fundraising partners include:

Donations from the public will be used to address the most pressing basic needs including food, water and blankets which will be procured on the ground and dispatched from MR’s ready stockpile.