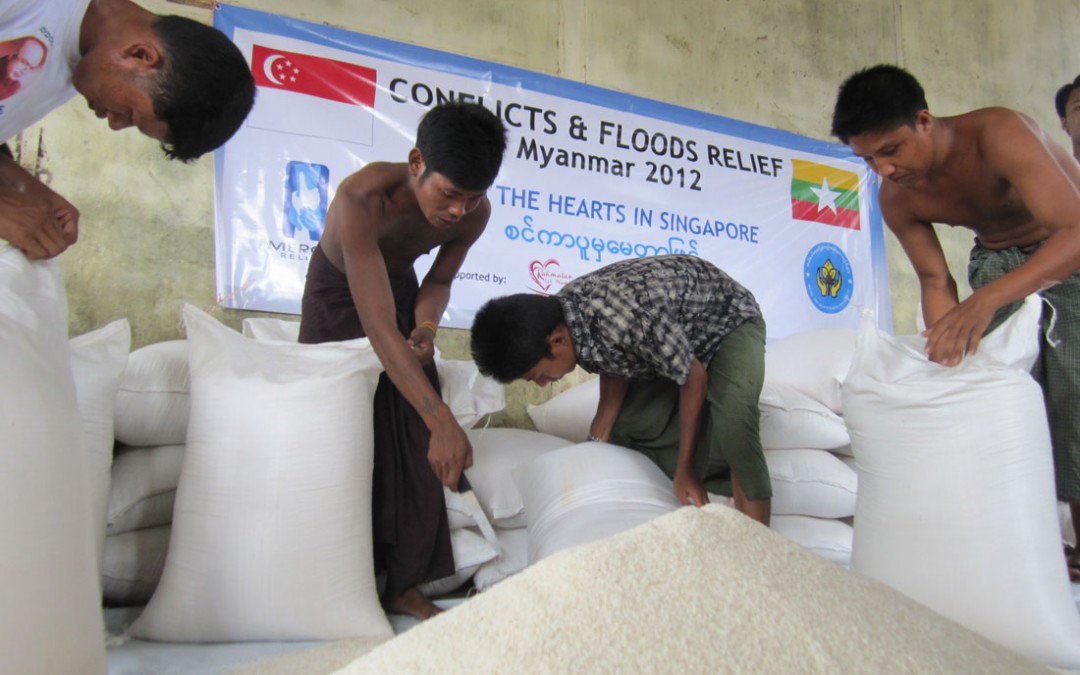 Having negotiated countless meanders of the Irrawaddy to personally deliver the first batches of relief supplies at the floods-affected villages of Pathein District in Myanmar last week, Singapore-born humanitarian NGO, Mercy Relief, continued its journey to further extend its aid efforts to the conflicts-stricken victims in the Rakhine and Kachin states.

The Mercy Relief (MR) response team was in Rakhine to distribute 35,000 ready-to-eat meals (Mercy Ready Meals), 2 units of MR’s water filtration systems (PedalPure) and 12 tonnes of rice to address the food and water needs of 500 families at five Internally Displaced Persons (IDPs) camps and an affected village.  The MR team also met with Chief Minister Hla Maung Tin of the Rakhine State Government (RSG) to update him on MR’s aid engagements there.

Another 2 units of PedalPure and other aid essentials including blankets are currently en route to Kachin state to serve 500 displaced persons there.  The SGD 168,000 worth of aid are donations from the people, trusts, institutions and companies in Singapore.

The ethnic unrests and the armed conflict in the states of Rakhine and Kachin respectively, have forced more than 123,000 innocent people homeless and affected 155,000 others, depriving them of basic survival essentials including food, water and shelter. Whilst the local authorities are striving to rebuild the lives of the IDPs by reconstructing temporary shelters with basic facilities, more aid is still needed to help improve their living conditions.  Working closely with the Myanmar’s Ministry of Social Welfare, Relief & Resettlement (MSWRR) and the RSG, MR shared its engagement philosophy with the partners –to personally deliver aid to crises-stricken communities, based on the principles of humanity, impartiality and neutrality.

Back in Singapore, MR is calling on volunteers to participate in the “Mind the Meanders for Myanmar” fundraising event, and walk the strings of local streets to do their parts and ventilate their compassion for the affected communities. The island-wide fundraiser will take place this Sunday, 16 September.

Right: Houses, buildings and lands were damaged by the ethnic clashes and violence, forcing many homeless.

Left: Children make up almost a third of the conflict- affected population.

Right: MR personnel worked alongside the locals to deliver the relief supplies at the various locations.

12 tonnes of rice ready for distribution to address the IDPs’ food concerns in Rakhine.

In response to the request from the Government of the Republic of The Union of Myanmar, MR has obtained the permit from the Charities Unit to raise funds from 16 August –16 September 2012 for the conflicts in Myanmar.  MR can only serve the distressed and disadvantaged as much as the support it gets from concerned donors.