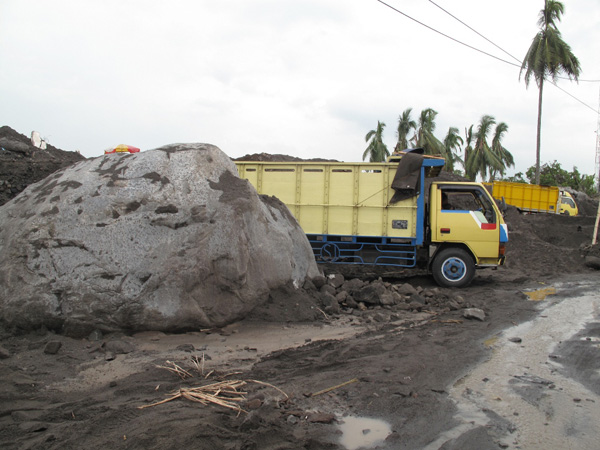 It may have been more than three months since Mount Merapi’s major volcanic eruptions, but its devastating impact and dangers on the communities residing on its slopes persists. The recent incidence of cold lavafloods, caused by heavy rains displacing volcanic materials including huge boulders (larger than the size of prime-movers) from Mount Merapi’s slopes, has exacerbated the situation with several villages buried and smashed.  Ten out of the eleven bridges providing access to the affected villages around the volcanic mountain were also damaged, posing a mountainous challenge to the reconstruction efforts.

Amidst the obstacles hampering aid efforts, Singaporean NGO Mercy Relief (MR) has initiated a comprehensive disaster rehabilitation programme to facilitate the resumption to normalcy for the affected communities.

Funded by public and corporate donations including those from the Singapore Government, MediaCorp (through its live fundraising TV programme), SingPost and the Rahmatan Lil’ Alamin Foundation, the S$400,000 community-based disaster risk management programme, in collaboration with the Indonesian Muhammadiyah University of Magelang, commenced implementation last weekend –featuring the construction of evacuation centres which includes central kitchens and improved sanitation facilities at two schools in the Dukun sub-district, which was severely affected during the last October’s eruptions.  When completed, the new evacuation centres will run educational workshops including public healthcare and hygiene, and early warning systems and drills for the villagers –all to enhance the communities’ preparedness against Indonesia’s most active volcano.

Three health clinics in the sub-districts of Dukun, Sewangan and Srumbung are currently being equipped withrespiratory care equipment such as oxygen concentrators, nebulizers and defibrillators, donated by Philips, to help address severe respiratory cases, especially in future eruptions of the Merapi.

Above that, the damaged communal water supply systems serving the Sewukan, Krinjing and Keningar villages of Dukun will be reconstructed, and household kits provided for the communities who had to abandon their homes during the enforced evacuation phase.

MR’s Vice-Chairman Ong Bon Chai and Singapore’s Senior minister of State (MFA) Zainul Abidin Rasheed were in Magelang to launch the reconstruction projects last week.  Mr Ong remarked, “with the strong support from the Singaporean public and corporations, we are able to embark on these reconstruction projects to help put the people’s lives back on track to normalcy, and critically too, preparing the communities to better face and respond to future eruptions given their vulnerable position.”

(Huge boulders larger than the size of prime-movers were swept down Mount Merapi’s slopes by the cold lava floods caused by incessant rains.)

(One of the ten bridges in Magelang that were damaged due to the massive flows of cold lava, hampering reconstruction efforts.)

(Thousands of homes were smashed and buried by the cold lava, rendering reconstruction efforts extremely challenging.)

(Laying the Foundation for Preparedness –the site at Sekolah Desa Banyubiru where an evacuation shelter is being built for the Magelang communities.)

(Philips staff Julien Descos (left) conducts a demonstration of an oxygen concentrator at the district health clinic in Dukun. Philips has donated S$9,000 worth of respiratory care equipment as part of MR’s disaster rehabilitation project in Magelang.)

In May 2006, MR had responded to the Mt Merapi eruptions and earthquake in nearby Bantul which happened within two weeks of each other, and which had displaced more than 500,000 in total. MR’s disaster response mission, which included four medical teams, was deployed to assist in the mass evacuations and attend to medical needs at evacuation camps. The teams also helped set up a potable water supply system and conducted personal hygiene programmes at the camps. Besides this, MR provided food relief supplies, children’s play packs and undertook the reconstruction of two schools in Bantul and Klaten. More than S$200,000 worth of aid was expended in all then.