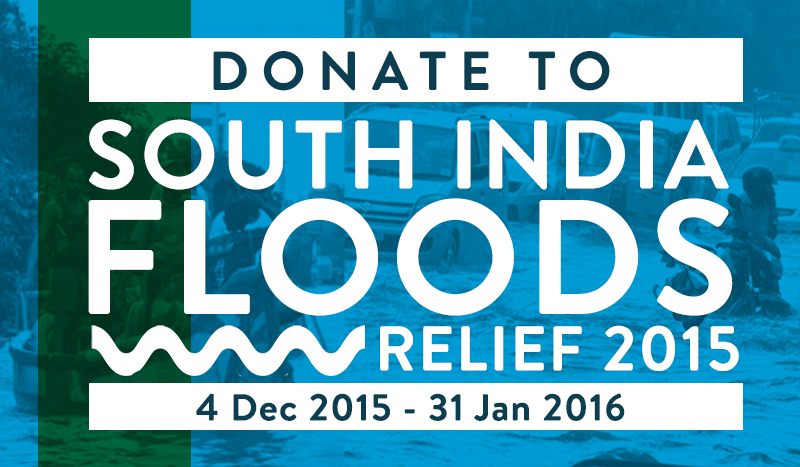 The fundraising campaign is in response to an appeal for aid from Mercy Relief’s ground partner in India, and will run from 4th December 2015 through to 31st January 2016. The funds raised will be used for procurement and distribution of food items, water, household essentials and basic medical supplies.

Official sources have reported that the death toll has reached 269 in the Tamil Nadu region and 54 in Andhra Pradesh, after incessant rains of record-breaking levels in India’s southern states of Tamil Nadu, Andhra Pradesh and Karnataka over the past month triggered flooding and widespread damage in multiple areas, including the city of Chennai.

So far, an estimated 3 million people have been affected by the massive floods, with over 5,000 houses submerged under water and their inhabitants now living on rooftops and flyovers. The city faces a huge shortage of emergency supplies such as safe drinking water, food and medicine.

Mercy Relief Executive Director Zhang Tingjun said: “There are currently more than 50,000 people in the evacuation centres and it is of utmost urgency that we provide support to as many of these survivors as we can. Sufficient funding is critical at this point to ensure the needs of those affected are met, especially with the prediction that heavy rainfall might arrive in the next 3 days that could cause the situation to worsen. We seek the public’s help in contributing to our aid efforts for the South Indian floods.”

Since 2004, Mercy Relief has disbursed over $550,000 in humanitarian aid in response to monsoon floods in India, including the 2004 Assam Floods where millions were rendered homeless and hungry, while water-borne diseases, scarcity of food, lack of access to potable water and decent shelter threatened to increase the death toll. Mercy Relief dispatched a relief team and distributed supplies such as medicine and food at affected areas, with concentrated efforts in India.