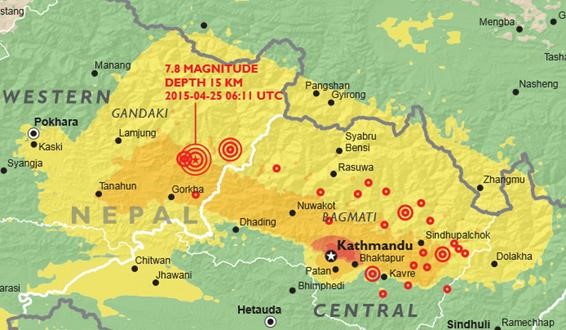 “Their only shelter is a plastic sheet over their heads. At night, temperatures drop to 11 degrees Celsius. With the cold weather, inadequate shelter, shortage of clean drinking water and proper nourishment, the villagers are at risk of flu and other illnesses,” says Mercy Relief’s International Programme Manager, Carol Liew who is currently in the field.

Items distributed by Mercy Relief include diarrhoea and flu tablets, water-purification droplets, and anti-bacterial soaps to prevent possible spread of disease. Medicinal supplies will be provided to the community clinic and distributed according to need. The team will also be establishing a hot kitchen for the villagers.

The Mercy Relief team is managing the palpable logistical challenges on the ground. Identifying the difficulties faced, Chairman Michael Tay says “There is a severe shortage of transportation assets and drivers in Kathmandu city. In addition, damage to roads and constantly recurring aftershocks interrupt the delivery of relief supplies.”

Tay adds that “The Nepali people have always been respected and admired by Singaporeans for their courage and resilience and their contributions to our nation have been exemplary. Our team draws from those qualities and are firmly committed to a long-term engagement in Nepal.”

On Saturday 25 April 2015, an earthquake measuring 7.9 magnitude with a 15km depth struck in Lamjung, Gorkha district 81km northeast of Kathmandu at 1156 hrs. The government of Nepal declared a state of emergency and appealed for international humanitarian assistance. More than 40 aftershocks have since been recorded. More than 4,400 deaths have been confirmed and the number of injured stands at 8,000 (at time of release). Mercy Relief sent its first response team on 26 April 2015 to ascertain ground needs and procure initial batch of relief supplies. MR will dedicate an initial tranche of SG$60,000 to acute relief efforts.

Mercy Relief also launched an urgent appeal for donations nationwide for the victims of the quake beginning 27 April 2015. The fundraising campaign will end on 30 June 2015.