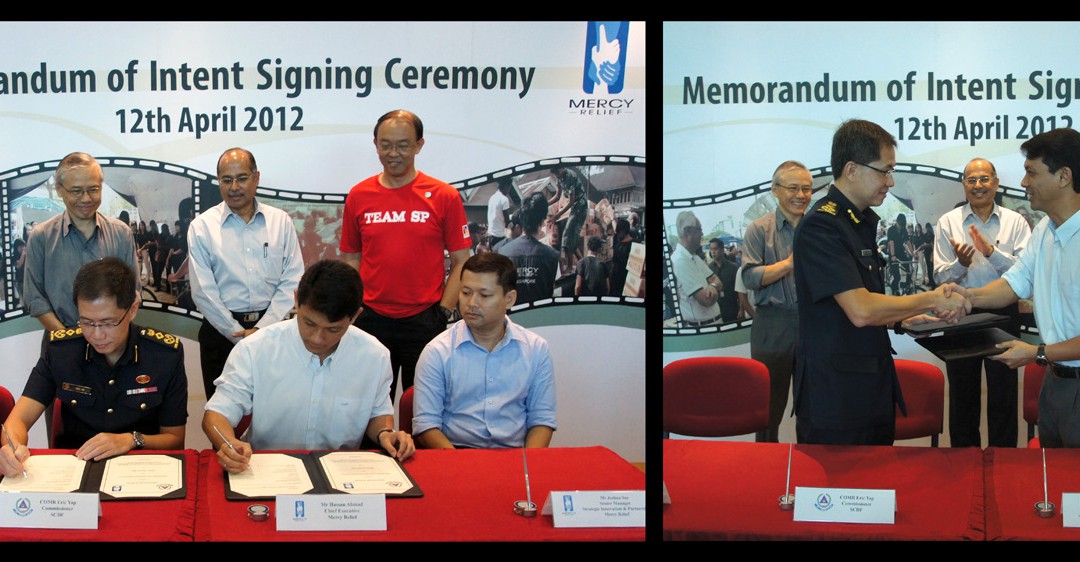 Two of Singapore’s active humanitarian responders to regional natural disasters – Mercy Relief (MR) and the Singapore Civil Defence Force (SCDF) – took the initiative to synergise their resources and networks through a Memorandum of Intent (MOI), laying the scope of humanitarian cooperation which includes enlarging and nurturing the pool of future humanitarians.

During acute post-disaster phase, the SCDF focuses on Urban Search & Rescue (USAR) to rescue trapped victims, whilst MR focuses primarily on medical relief (including medical evacuation service) and provision of basic survival needs to the victims.  The two objectives are logical and natural complements in the emergency setting.

The partnership includes a framework to facilitate the participation and exposure of SCDF officers and the Civil Defence (CD) Lionhearter Club members  to MR’s Overseas Volunteer Expedition (MOVE), sustainable development and rebuilding programmes.  Commissioner of SCDF Eric Yap, who signed the MOI, commented, “SCDF’s two core values of Pride and Care, as well as its efforts in global humanitarian outreach through our Operation Lionheart, fits in seamlessly with MR’s duty of providing humanitarian aid to the other countries that are affected by disasters.”

In 2010, MR and Singapore Polytechnic (SP) launched the first Diploma-Plus certificate programme in Humanitarian Affairs in Singapore, if not Asia, to acquaint students with principle, mechanics and dynamics of humanitarian work.  Last August, MR, SP and SCDF ran the inaugural Youth Humanitarian Seminar with the theme ‘Global citizenry –Youths of Today, Humanitarians of Tomorrow’, sharing with students from secondary schools, junior colleges and tertiary institutions on the need to be useful global citizens and avoid being passive bystanders to the less fortunate around them.

“With the creation of the MR-SP certificate programme in Humanitarian Affairs, SCDF was invited to teach two CD related modules.  We believe that this will serve as a good platform for SCDF to provide our youths with greater insights to disaster response and humanitarian assistance,” added Commissioner Yap.

The other MOI signatory, MR Chief Executive Hassan Ahmad said, “The formalising of this partnership between MR and SCDF characterizes the strong and growing commitment of both parties to strengthen and hinge on each other’s capabilities which in turn will enhance delivery of aid and further develop the humanitarian sector, both locally and regionally.  It is also important that we address and invest in the longer-term needs of the humanitarian sector which include grooming future humanitarians in terms of knowledge, skills and exposure.”

SCDF’s diverse and reputable capabilities, both human and technical competence, in emergency preparedness and response, would help enhance MR’s response capacity.  With MR’s sound humanitarian network in the region, the MOI would provide SCDF officers with more platforms and better opportunities to ventilate their compassion through overseas humanitarian outreach.

Mr Hassan continued, “Natural disasters occur with little or no notice, and require immediate and swift responses so as to save and minimise further loss of lives.  Despite the varied status  – GO and NGO  –  the SCDF and MR could enhance each other’s response capabilities for future major regional disasters, and even provide a possible unified response from Singapore.  To achieve that, the two organisations are committed to better understand and greater appreciate each other’s disaster  response philosophies, capabilities and constraints.  In a region where 70% of the natural disasters take place, what is crucial is that constant dialogue and engagement starts before disasters strike.”

5,000 students hit the streets to spread the giving bug

(left) The SP Daiko drummers perking up the 5,000 freshmen before they took to the streets to help raise funds for PC2012 and MR.

(Centre) SP Principal Tan HC and MR Chief Executive Hassan swung the gong to mark the start of the fundraiser.

(Right) Principal Tan leading by true example by filling the donation cans that passed by him.