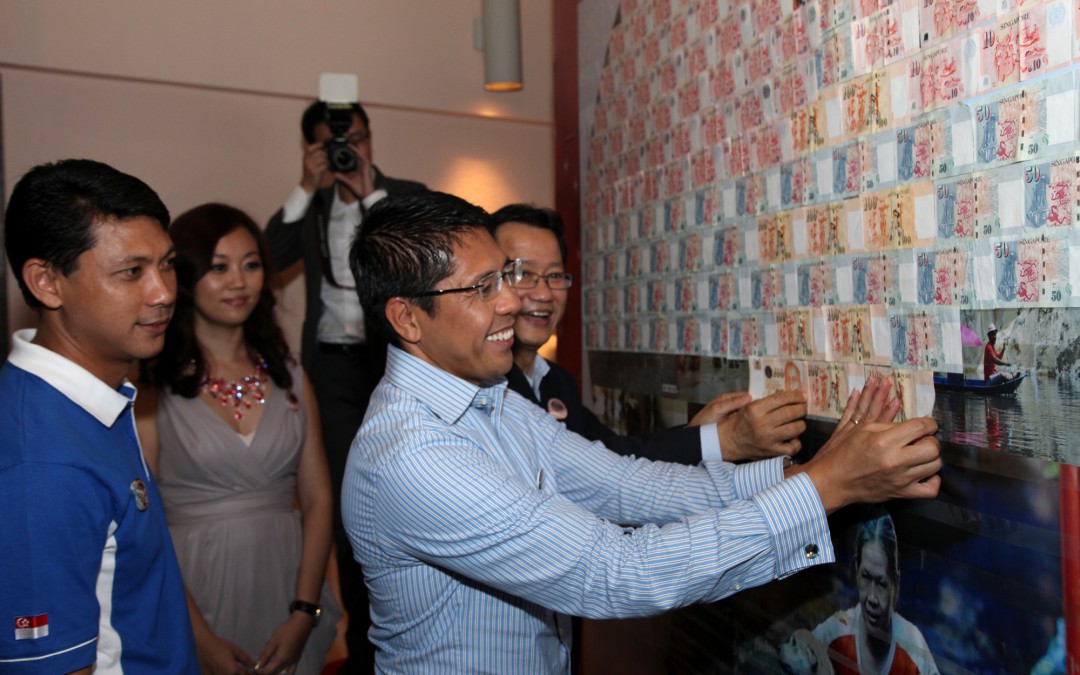 HSR International Realtors (HSR) spearheaded a fundraising event – The Learn-A-Thon 2011– a complimentary wealth creation and motivational seminar by 14 of established global speakers. About 1,500 attendees participated in the event and raised funds for the flood victims in Southeast Asia.  Part of the fundraising activity is the forming of a collage where participants attached currency notes onto a 9 square-metre canvas which incidentally qualified the efforts into the Singapore Book of Records. Participants also expressed their sympathies and well-wishes in writing, on three large banners called ‘the love banners’. In addition, donation cans were circulated amongst the participants to encourage them to contribute more.  An art auction was also included.

Proceeds from the auction sales and the donations collected were channelled to Singapore-born humanitarian outfit Mercy Relief to continue its ongoing aid efforts in Thailand, Cambodia and the Philippines.

The fundraising efforts raised a total amount of S$135,900, exceeding its initial target of S$100,000. Last April, through a similar platform, HSR had raised more than S$60,000 for the Japan tsunami relief.

The event was pulled together by a committee of 17 like-minded philanthropic individuals within just a space of two weeks.  Among the 14 creation wealth speakers are Boyd Au, Arthur Camazzi, Ken Chee, Andrew Chow, Mike Handcock, Adam Khoo, Wendy Kwek, and Dave Rogers, whom contributed their time and complimentary expertise for the good cause.

CEO of HSR and main organizer of Learn-A-Thon 2011, Patrick Liew said, “The organising committee of Learn-A-Thon felt strongly that we wanted to try to do something practical to alleviate the sufferings of our regional neighbours in these times of crisis, so a wealth creation seminar seemed like an initiative we could quickly stage since we are mostly all involved in the motivational seminar industry already.”

Southeast District Mayor and Senior Parliamentary Secretary for Defence and National Development, Dr. Mohamad Maliki Osman, graced the event as the Guest-of-Honour.  Ambassador and diplomatic representatives from the embassies of Thailand, Cambodia and the Philippines were at the event.

Commenting on the fundraising initiative, Mercy Relief Chief Executive Hassan Ahmad said, “One of the key elements of effective aid is swiftness in response. The Seminar organiser’s ability to put together this large fundraising event and bring in about 1,500 people together within a fortnight is highly commendable. The members of the organising committee displayed great amount of zeal and passion as they strive to support the ongoing relief efforts. Mercy Relief can only serve as much as the support it receives.”

Dr. Mohamad Maliki Osman delivered a speech to the 1,500 attendees, commending the commitment and benevolence of Singaporeans who have come together to support the charitable cause.

Dr. Mohamad Maliki Osman expressed his well-wishes for the Southeast Asian flood victims through writing on the ‘love banner’.

A video montage of Mercy Relief’s relief efforts was screened during the wealth creation and motivational seminar by 14 established global speakers.

(From left) Minister Counsellor of the Royal Thai Embassy in Singapore Nipon Petchpornprapas, Mrs Patrick Liew, representatives of the Cambodian community in Singapore and Ambassador from the Embassy of the Republic of the Philippines in Singapore H.E. Minda Calaguian-Cruz representing each of the countries involved in the SEA floods crisis.