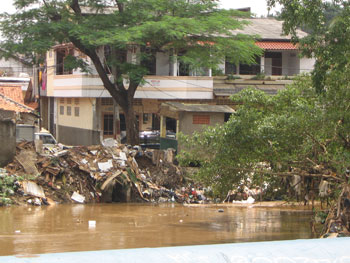 Intense and continuous rains in February 2007 caused one of the worst episodes of flooding Jakarta had experienced to date, exacerbated by deforestation in the south of the city and waterways clogged with debris. The final official death toll was recorded at 80, with more than 340,000 people displaced due to the destruction caused.