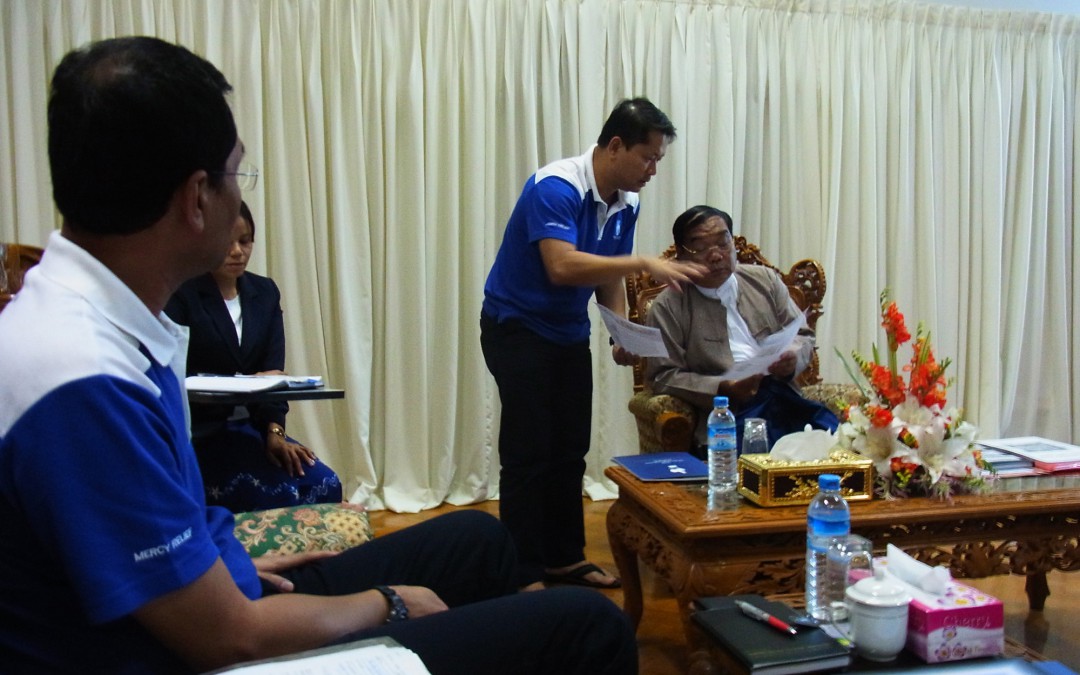 The ethnic unrests and the armed conflict in the states of Rakhine and Kachin respectively have forced many innocent victims homeless and deprived of basic survival essentials including food, water and shelter.

On the invitation of Myanmar’s Ministry of Social Welfare, Relief and Resettlement (MSWRR), a Mercy Relief (MR) team met with Deputy Minister U Phone Swe and officials from the MSWRR in the capital Nay Pi Taw, to present and propose its earlier post-Nargis relief efforts around the Irrawaddy delta and possible aid engagements for the conflict-stricken communities in the Kachin and Rakhine states, and the affected people in 9 flood-affected States/Regions.  The Singapore NGO also shared its engagement philosophy with the officials –to personally deliver aid to crisis-stricken communities, based on the principles of humanity, impartiality and neutrality.

Official reports state that the crises have affected and displaced over 200,000 people, with almost a third being children.  Humanitarian interventions such as the provision of food and water, clothing and medicines are critical during this emergency phase.  In the longer term, recovery efforts must include housing, livelihood opportunities and psychosocial support to help rebuild the communities.  The MSWRR has made an official request to MR for the provision of humanitarian assistance for these internally displaced communities in Myanmar.

Flooding across 9 Regions and States causing massive destruction to farmlands, homes  and schools.

In response to the request from the Government of the Republic of The Union of Myanmar, MR has obtained the permit from the Charities Unit to raise funds from 16 August –16 September 2012 for the conflicts in Myanmar.  MR can only serve the distressed and disadvantaged as much as the support it gets from concerned donors.