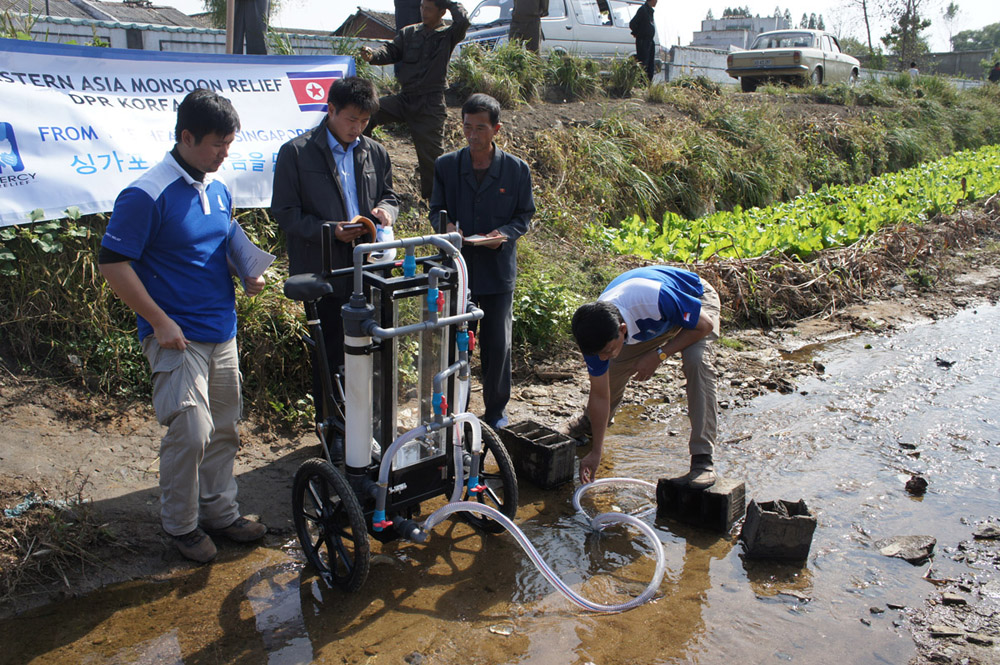 10 units of Singapore-made PedalPure were delivered to the various floods-affected counties in the DPR Korea to help address the current shortage of potable water and prepare flood-prone communities for future crises.

Multiple and widespread floods caused by persistent rains from the southwest monsoon and typhoons rendered more than 200,000 Koreans homeless and destroying much of their agricultural farmlands which were due for harvest.

Developed by Singaporean humanitarian NGO, Mercy Relief (MR), the PedalPure is a water filtration system which churns clean water at the rate of 700 litres/hour through cycling on the machine. Its membranes can filter bacteria and solid particles as small as 0.01 microns in size.  With the shortage of diesel at the floods-hit rural and remote areas where many of the communities’ water sources have been contaminated by landslides and overflowing rivers, the 38-kilogram manual-powered PedalPure helps address the ground challenges appropriately.

MR team demonstrating the use and maintenance of the PedalPure to local disaster management officials in Ryong Ho rural sub-district, Yonggang County.

The 39-kg PedalPure is designed for easy handling and transfer.

60% of the homes in Chonnae County were severely damaged or buried by an avalanche of boulders and landslides leaving more than 6,000 villagers displaced.

The elderly and children are the worst affected as they try to regain their lives back to normalcy.

Partnering the local  Disaster Management Agency, the People’s Committee, the DPRK Ministry of Foreign Affairs and the World Food Programme (WFP), MR’s two aid teams were in DPRK to help support the local government’s earlier relief and ongoing rehabilitation efforts.  In addition to the 10 units of PedalPure, the teams delivered and distributed 2 tonnes of fresh fruits, bread and fresh milk, 500 hygiene kits and 24 tonnes of the nutritious Mercy-Ready-Meals (MRMs) which have a 3-year shelf-life.

Aid totaling more than SGD300,000 delivered to the Korean flood victims was provided by the donations from the public, social and religious institutions and corporations in Singapore. But more still needs to be done for the tens of thousands who are still homeless and lacking of basic necessities including clean water, hygiene essentials, homes and schools for the children.

78,000 packs of Mercy-Ready-Meals (MRMs) comprising nutritious red and green bean meals arrived in DPRK from Singapore for distribution at badly-affected counties including Onchun, Chonnae and Yonggang.

The MR team personally monitoring the progress of the reconstruction of the Edong bridge in October.

70% of the Edong bridge has been completed, which would connect more than 8,000 people.