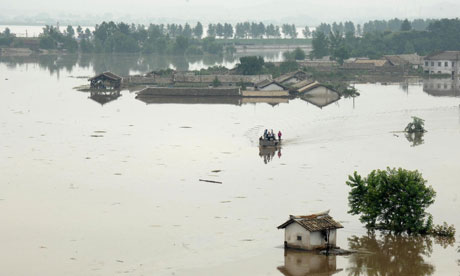 In response to the direct official requests for assistance from the governments of DPR Korea (DPRK), Mercy Relief (MR) dispatched the first shipment of aid to Pyongyang to help provide relief to more than 200,000 Koreans who are displaced by the massive floods.  More than 20 tonnes of relief supplies worth SGD 270,000 including its 80,000 packs of its in-house brands of food (Mercy-Ready-Meals) and 10 units of water filtration systems (PedalPure) are being delivered to the DPRK this week for this distribution at the worst affected areas of Anju and Songchong provinces.  Seeing off the freight were officials from the Embassy of DPRK in Singapore including its ambassador, H.E. Jong Song Il, together with the tribesmen from MR.

The devastating floods in the Democratic People’s Republic of Korea (DPRK) submerged more than 160,000 acres of farmlands and the United Nations said two-thirds of the country’s 24 million people were facing chronic food shortage.

Mercy-Ready-Meals (MRMs) contains high fluid content meal which serves to rehydrate disaster victims, fill their hunger and provide energy.  Each MRM pack weighs 250gm and is easily consumed and digestible, which makes it suitable for infants, the elderly and injured, without any re-heating requirement. The MRMs have a shelf life of three years.  More than 940,000 packs of MRMs have been dispatched and distributed to disaster-affected locations in China, Japan, Thailand, Cambodia, Pakistan and the Philippines.

The PedalPure is designed and developed by MR and the Singapore Polytechnic.  It is a manual-powered filters system which do not require electricity to pump, and is very appropriate for use in disaster-stricken and remote areas where power supply is affected or scarce. The 700-litre-per-hour system is able to fill 466 bottles (1.5litre capacity) with water per hour. Equipped with wheels and brakes, the system is easily transportable across challenging terrains.  The dual-flow fibre membrane ultra filtration system can remove particles larger than 0.01 microns, including most bacteria. The membranes can be easily cleaned through a backwash.

MR is in cooperation with the Government of the DPRK and the World Food Programme (WFP) on the provision of the MRMs to the victims.

MR has obtained the permit from the Charities Unit to raise funds for the regional crises from 11 August –10 September 2012.