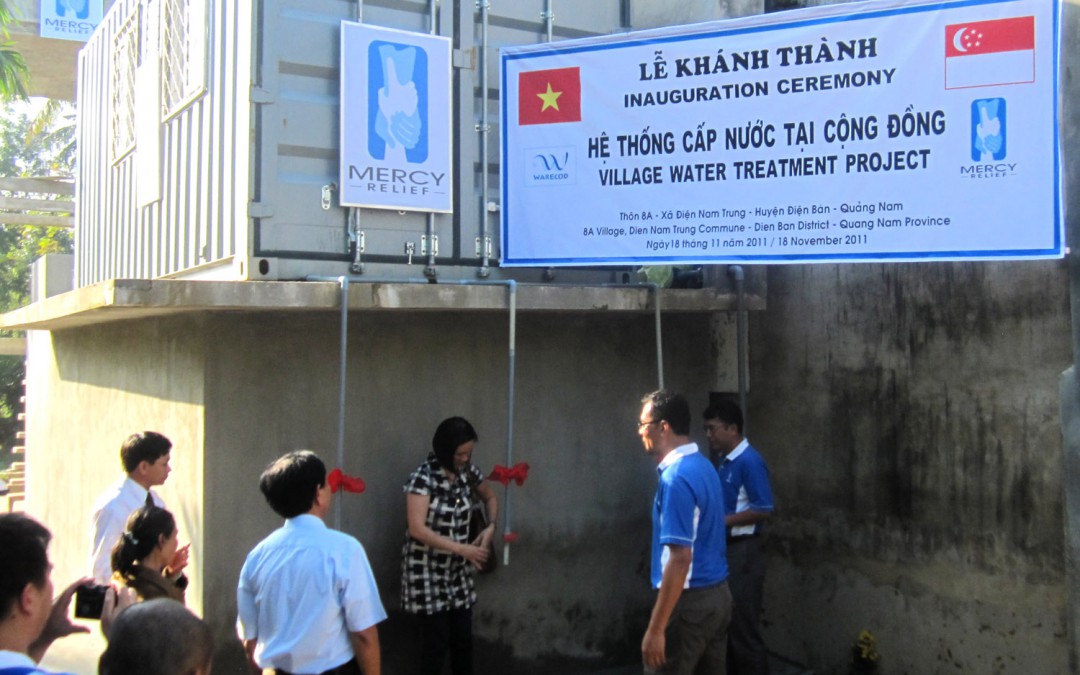 Expanding on its development and disaster preparedness efforts in the region, Singapore-born-and-bred humanitarian outfit Mercy Relief (MR) has partnered Vietnam’’s Centre for Water Resources, Conservation and Development (WARECOD) in implementing two capacity-building initiatives in the country’’s Quang Nam province.  Last night saw the completion of a water treatment project and a disaster evacuation centre in the districts of Dien Ban and Nui Thanh respectively.  The former allows for access to safe drinking water while the other provides safe shelter to the communities living in typhoon-prone Central Vietnam.

Previously, more than 600 villagers from 151 households in Dien Ban district depended on a river, heavily contaminated by aluminum and iron, for their use and consumption resulting in villagers to suffer from kidney stones and other skin diseases.  To overcome the poor water quality and health threat, villagers had to spend 5,000VND (SGD0.30) daily on drinking water.  With the new SGD170,000 water treatment system, the community now has clean and safe water to improve their well-being.  The project is part of MR’s sustainable development programme which focuses on water and sanitation, shelter, livelihood, health and education.

Over in Nui Thanh district, survivors of the 2009 Typhoon Ketsana are now better equipped to face future typhoons.  A SGD90,000 two-storey structure, made up of five 40-footer containers put together, has been erected at the Sao Mai Kindergarten for the school to be used as an evacuation centre for the local community to seek refuge in future natural calamities.  The new self-contained evacuation centre has living spaces for evacuees, water and sanitation facilities, and storage areas for essential relief items including food and inflatable boats.  During peacetime, the designated evacuation facilities are being utilised for community enrichment programmes, including a library, evacuation drills and life-saving skills.

The inauguration ceremony was graced by the Vice-Director for the Department of Foreign Affairs of Quang Nam Province Nguyen Ngoc Kim, which reflected the provincial government’s support for the project.  Accompanying him was MR’’s Director of International Programme, Sahari Ani, who said, ““It is imperative that the quality of water for consumption is improved during non-crisis period, as this survival essential becomes an even more precious commodity during a crisis.  The new evacuation shelter complements the Ministry of Agriculture and Rural Development (MARD) and the Central Committee for Flood and Storm Control’s (CCFSC) disaster preparedness measures. Prior to this, the villagers lacked proper evacuation centres, which made the delivery of aid extremely challenging as there was no centralised facility to gather the victims.  Moving forward, the villagers have been given clear instructions on what to do and where to go, such that coordination of relief efforts can be swifter, hence more effective.”

Mdm Nguyen Thị Duyen(left) with her great-grandson and daughter displaying their newly installed water system at their house in Dien Nam Trung Commune. Previously, they had to travel a distance to a nearby river to obtain water for daily consumption and use.

MR personnel Adrian Yeo explaining the water system to a local from Village 8A in Dien Nam Trung Commune. The new SGD170,000 water treatment system is able to provide clean and safe water for the communities in Dien Ban district.

MR Director Sahari Ani reiterated to the locals and district officials in Nui Thanh district on the importance of the new evacuation centre and disaster preparedness measures.

District officials, WARECOD personnel together with MR Director Sahari Ani (centre) were engaged in the symbolic ribbon-cutting ceremony for the completion of the new evacuation centre in Tam Giang Commune, Nui Thanh district.

MR Director Sahari Ani sharing with Quang Nam’s Vice Director for the Department of Foreign Affairs Nguyen Ngoc on MR’’s water filtration system which is placed in the new evacuation centre in Tam Giang Commune. Apart from the water filtration system, the two-storey shelter is also equipped with aid supplies and fixtures such as four toilets with proper sanitation facilities, a furnished bed, a portable gas stove as well as life vests and buoys.