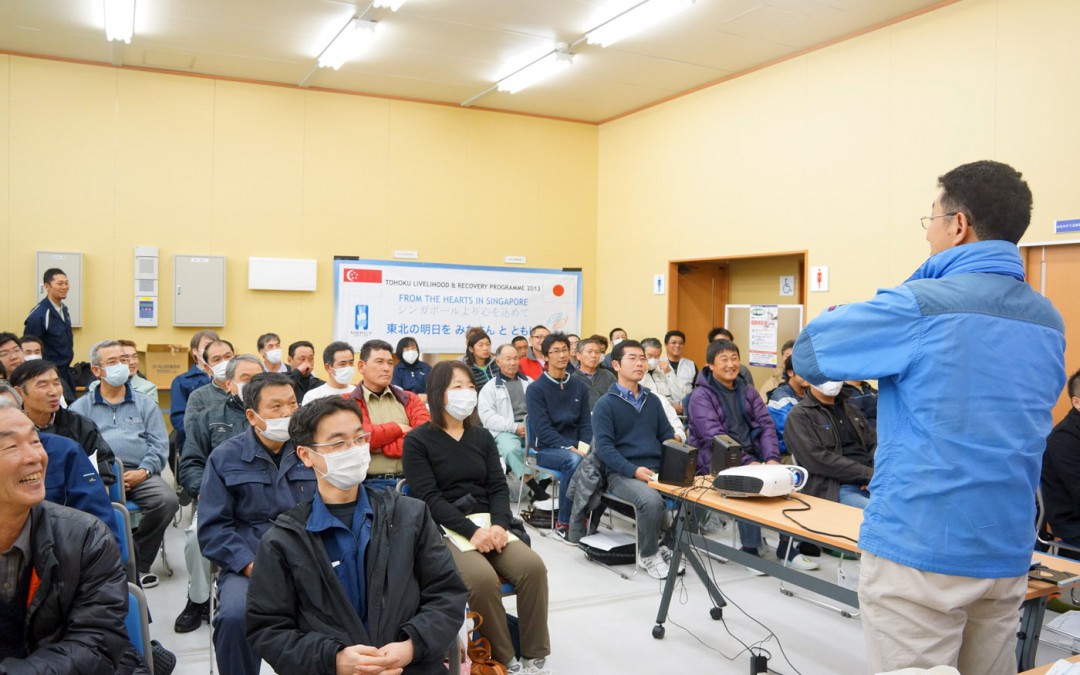 Two years since the earthquake and tsunami wreck the lives of millions along the coastline of Japan’s northern islands, Singapore-born humanitarian NGO, Mercy Relief, completed its Livelihood and Recovery programme for the survivors of the colossal crisis.

In support of the Japanese government’s recovery efforts for the affected prefectures and re-employability of the survivors, Mercy Relief (MR) collaborated with a local volunteers’ network, Project Fumbaro Eastern Japan, to implement the programme for victims who had lost their sources of livelihood, including farmers and fisher folks, to equip them with alternative and relevant skills. The eight-month programme comprised theory and practical trainings for more than 830 survivors from Miyagi and Fukushima to become licensed heavy-machinery operators, where they could then be employed for the government’s clearing of debris and redevelopment efforts at the devastated locations.

With the licences to operate bulldozers and excavators, the survivors were able to have new sources of income and in tandem help to expedite the nation’s rebuilding efforts.  MR Chief Executive Hassan Ahmad was present at the completion ceremony and he explained, “Many lost their sources of livelihood from the twin terror.  Our aim is to make the survivors relevant and useful once again, and just as importantly, injecting some normalcy into their lives by letting breadwinners resume as breadwinners – which is the purpose of this programme.”

The completion ceremony took place at Minami Soma, one of the worst–affected areas in Fukushima, and was attended by the city’s mayor, Sakurai Katsunobu, members of the Tokyo Metropolitan Assembly and officials from Minami Soma and Soma cities.  The programme cost S$320,000 through donations from the Singaporean public.

Fukushima’s vice-governor, Masao Uchibori, personally met and extended his gratitude to the Singapore NGO for its relentless efforts towards the recovery of Tohoku.  The MR team then joined the people and officials of Fukushima for the observance of the 2nd anniversary of the double disaster.

MR had deployed its first response team within 24 hours from the appeal made by  Japanese officials for international assistance.  Six more relief teams were subsequently sent to the Tohoku region over a period of four months to address the survival and wellness essentials of the survivors.  More than SGD2.8 million of aid was extended across the prefectures of Iwate, Miyagi and Fukushima over the two years.

For a more detailed report on MR’s engagements in Tohoku, click here.

(left) MR personnel Masahiro Ishizeki bringing the mayor of Minami Soma City Sakurai Katsunobu through MR’s efforts towards the recovery of Tohoku since the colossal crisis occurred in 2011.

MR Chief Executive Hassan Ahmad presenting the licence to one of the 832 survivors who had benefited from the eight-month recovery programme, observed by the city’s mayor.

MR team met the vice governor of Fukushima Prefecture, Masao Uchibori whom extended his gratitude to the Singapore NGO for its contributions and humanitarian efforts in Tohoku.