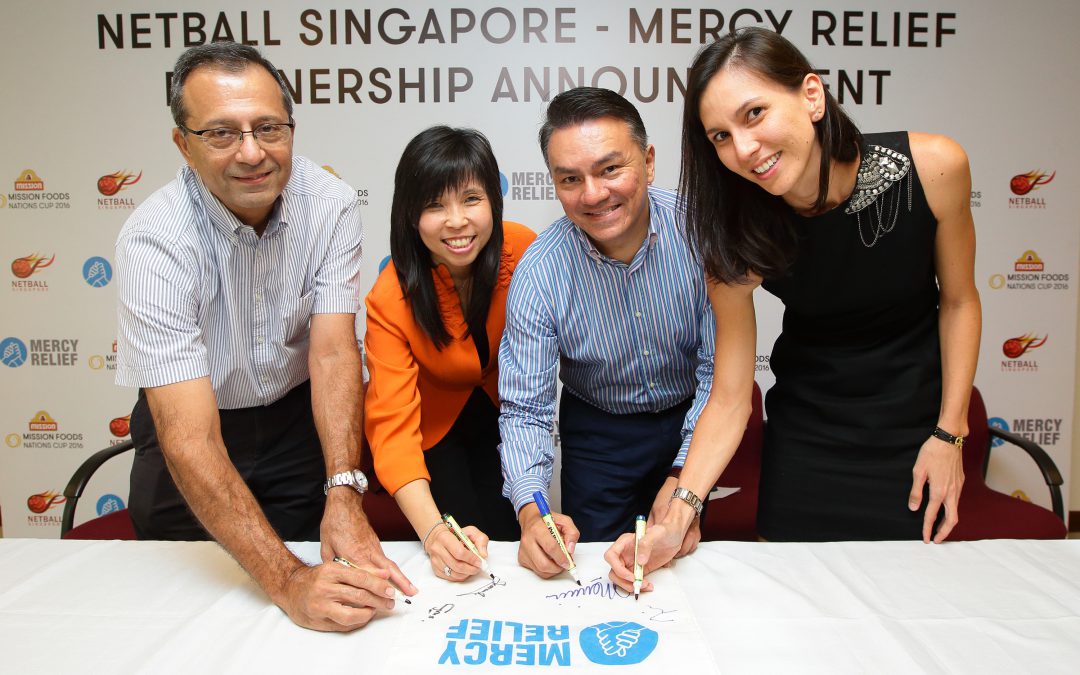 SINGAPORE, 29 June 2016 – SINGAPORE’S leading independent humanitarian organisation, Mercy Relief has been selected as Netball Singapore’s inaugural adopted charity as they enter a new three-year partnership. This is the first official collaboration between a local national sports association (NSA) and a humanitarian assistance and disaster relief organisation in Singapore.

Established in 2003 to respond to human tragedies and disasters in Asia, Mercy Relief aims to champion compassion and care by providing timely and effective aid when disaster strikes, and empowering communities in the region. Mercy Relief and Netball Singapore share synergy in their emphasis on and steadfast pursuit of key success qualities such as agility, teamwork, uniting people, and excellence in performance.

Zhang Tingjun, Executive Director of Mercy Relief, explained, “As a former national netball player myself, I firmly believe that we must not only be simply great athletes but also role models and contributors to our local communities. National athletes have a responsibility to wield their influence responsibly and ideally for the greater good. Mercy Relief is delighted to be selected as official adopted charity of Netball Singapore. When disasters befall the countries of the teams we play against, whether it be a cyclone in the Philippines or a flood in Thailand, our netballers can step up in solidarity with their counterparts. Over time, this will build goodwill between Singapore and our neighbouring netball countries.”

Chairman of Mercy Relief Suhaimi Rafdi added, “This partnership is the first of its kind and we are excited about the many opportunities Netball Singapore and Mercy Relief will have to work together for the greater good, starting with our flagship fundraiser, Ground Zero – Run for Humanity on 14th August. With their support, we aim to unite communities locally and beyond with sport, and deepen the impact of our humanitarian initiatives within the region.”

Mercy Relief is one of few home-grown charities whose work extends beyond Singapore into 24 different countries in Asia, and continuously strives for utmost quality in their humanitarian efforts. The national netball team takes pride in its commendable achievements in regional competitions and has undoubtedly made their mark in Asia over the past years.

President of Netball Singapore, Jessica Tan added, “This partnership with Mercy Relief is a platform for the netballers to go beyond their sport to do social good and to inspire their young fans. This is the first time Netball Singapore has partnered a humanitarian assistance and disaster relief organisation like Mercy Relief and we hope to pave the way to allow our future netballers to aspire to achieve great things outside the court.”

About Mercy Relief
Headquartered in Singapore, Mercy Relief was established in 2003 to respond to human tragedies and disasters in Asia Pacific. Today, we are Singapore’s leading independent disaster relief agency with dedicated leadership, capacity building expertise and an affiliate network operating across the entire disaster management cycle. Mercy Relief provides emergency aid within 72 hours of an appeal in the aftermath of a disaster.

About Netball Singapore
Netball Singapore is the national body for netball in Singapore. This well-established organisation has progressed dramatically since it commenced in 1962. It has become a professionally run National Sport Association which generates a proportion of its expenditure through sponsorship and other streams of revenue-generation. The association supports over 60 multi-team club members and over 230 schools have netball in their curriculum.

Netball Singapore’s mission is to encourage, promote and develop netball in Singapore. Singapore successfully hosted the World Netball Championships in July 2011 and the Mission Foods Asian Netball Championships in 2014 at the Singapore Sports Hub with the National team winning the trophy and a place in the 2015 World Cup. Singapore was also victorious in the 2015 SEA Games, winning the Gold medal in the netball event Our netball team was named the Team of the Year (Team Sport) in the Singapore Sports Awards for two consecutive years, in 2015 and 2016.. The National Team are currently ranked 16th in the World.