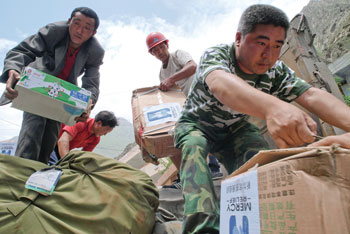 In the midst of China’s joyful preparations for the Beijing Olympics, the fury of the 8 Richter earthquake in Wenchuan rocked Sichuan and shocked the nation on 12 May 2008, leaving at least 69,000 dead and rendering more than five million homeless. Four days after the disaster, Mercy Relief’s acute response team made its way to Ground Zero and was kept on the road for a month to personally distribute S$450,000 worth of relief supplies comprising large 30m2 system tents which were erected at temporary schools, food and medicines to the affected communities across four prefectures namely Aba, Mianyang, Deyang and Chengdu.

On 1 June, which was Children’s Day in China, MR’s Goodwill Ambassador, homegrown pop star Stefanie Sun, helped distribute Mercy Relief’s first batch of Play Packs to schoolchildren in Mianyang Prefecture and Dujiangyan. Stefanie also visited the quake victims at an Internally Displaced Persons (IDP) camps to lend a listening ear to hear the victim’s pain and sorrow having lost their loved ones to the disaster.

On 12 January 2009, exactly seven months after the devastating earthquake in Sichuan, Mercy Relief completed all of its seven reconstruction projects in the Ziyang prefecture.  The projects’ inauguration ceremonies were attended by the various funders, along with MR’s Goodwill Ambassador, singer Stefanie Sun, who had helped appeal for funds after her earlier trip to Sichuan during the acute phase.

The seven reconstruction projects amounting to S$1,212,000 include:

Student Assistance
Mercy Relief also provided financial assistance worth S$30,000 to 20 underprivileged students at Laojunjing whose families were badly hit by the earthquake. The financial assistance would enable the children to stay in school dormitory and continue their education for the next 3 years. This would also relive their families from the financial burden of having to rebuild their homes and lives.